THE
WORD
AS
A  WORD

POETRY WRITING AS SELF REFLEXION 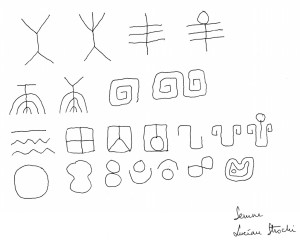 Lucian Strochi is the poet of the primordial Verb, of the active and plenary beginning, threatened by no trace of corrupting thought or blind rhetoric, just by selfwondering, elevating and becoming (the word = pain’s haematoma), in the transparency of a Barbian * second uttering (the uttered word means refusing to utter another) as well as in the thrilled naturalness of the fervour: the word is not nature’s resistance/ it is but its hesitation.

Lucian Strochi’s Ars Poetica in the Word Trilogy  is that of the Logos, after the Fall of Man, in the piece (or the remains) still carrying the aura of the absolute, a fractal which,  no matter how menaced with the poetic simulacrum, increases ever more with the innermost secret or with respecting deafening silence.

The cry not cried out, the skeleton of a river, the self splitting, the thought’s wing are all but signs of a dynamic poetics, the poetics of a glance, as long as the lightning, and the poetics of  expiatory confession, as pale as eternity’s biting.

For Lucian Strochi poetry writing is but the accomplishment of the uttering, by agonizing determination (drowning thirst) and by the absolute of an ego who reflects its image into any body: I shall look at you until I have turned into a look. We can find no trace of estrangement here, it is but purifying memory until it reaches the fractal transparency foreshadowed in the wide range of feelings.